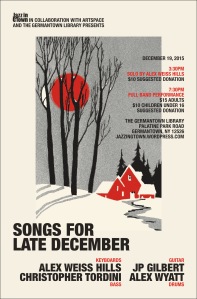 Alex Weiss Hills opened his afternoon solo performance of Songs for Late December with Oh Come, Oh Come, Emanuel. He warned us that this concert was most likely not going to be what we expected. He had anticipated his audience well, and gave us a lot more than just Christmas tunes with a jazz beat. Alex chose mostly hymns, and his interpretations were dreamy and complex. It was fascinating to watch him work the keyboard to its potential.

The evening full band performance was sold out. “It was a joy to perform for such an engaged audience. I felt really wonderful energy from the moment we were introduced.” The quartet, composed of Christopher Tordini on bass, J. P. Gilbert on guitar, and Alex Wyatt on drums, performed some songs from the solo concert, but the mood was more driven and upbeat, and those of us who were at both concerts enjoyed comparing his style and arrangements. The musicians shared Alex’s enthusiasm and played with a keen sense of timing and interaction, the melodies, harmonies, and solos flowing seamlessly from one to the other.

Alex’s love of Christmas music started late in his young life, and he was immediately intrigued when Jazz in GTown proposed this concert to him. He saw not only the chance to work his style into the hymns, but also the opportunity to design its poster around an early twentieth century American Christmas card. 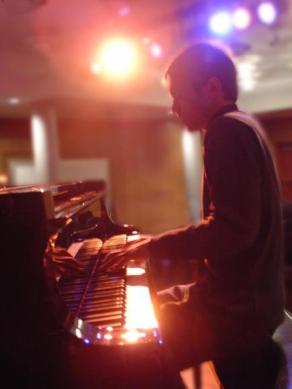 Alex Weiss Hills has been studying piano since age five and received a Downbeat Best Student Soloist Award while in high school. He graduated from The New School for Jazz and Contemporary Music in 2006.  For his senior recital he arranged his own compositions for a 16-piece ensemble.  Since 2002 Alex has been performing in NYC as a bandleader and sideman at venues such as Cornelia Street Cafe, Barbes, BAM Cafe Live, The Stone, Smalls, Fat Cat, Rockwood Music Hall, the South Street Seaport, and just this November at the Bruno Walter Auditorium at the New York Library for the Performing Arts at Lincoln Center.

An accomplished virtuosic pianist, Alex finds immense joy in writing and arranging. He arranged and performed on the score for the Sundance 2014 film Listen Up Philip. The score, recorded in one weekend, has been called stunning, warm and reminiscent of the Miles Davis-Gil Evans collaboration Sketches of Spain, and has been  praised for its intricate orchestration. 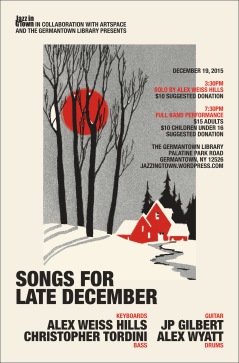 Bassist Christopher Tordini and Alex have been playing together since their New School days and they co-led the seven-piece ensemble, Buy My Book, for which they both arranged original compositions. Christopher is an in-demand bassist in NYC where he performs with established jazz icons as well as a diverse range of emerging musicians including Greg Osby, Jeremy Pelt, the Becca Stevens Band, Tyshawn Sorey, George Garzone, Steve Lehman, Jim Black, Chris Speed, and John Hollenbeck.

Rounding out the group is guitarist J.P. Gilbert.  J.P and Alex are long-time collaborators in such disparate settings as Abacus, the avant-garde jazz/noise/mathematically influenced group, to the americana string band Brambling where Alex performed on accordion. They also toured nationwide together in J.P.’s country band, J.P. & the Gilberts.

Playing the American, English, Scottish, and Irish folk songbooks with Brambling, Alex was exposed to the singing of Anne Briggs and other folk revivalists of the 60s and 70s. Unaccompanied by instruments, Briggs’s crystalline voice demonstrates the timelessness and beauty of simple folk song melodies that have been passed down the generations orally. Alex will play tribute to the folk melodies of traditional holiday songs by setting them at the forefront of his arrangements. Other influences will include Bill Frisell, Brad Mehldau, Wayne Shorter, Nick Drake, Tinariwen, Bert Jansch, and Daniel Lanois.

jazzingtown@yahoo.com
In Collaboration with The Germantown Public Library